Klamath Blue Green Algae : the most complete and nutritious superfood in the world 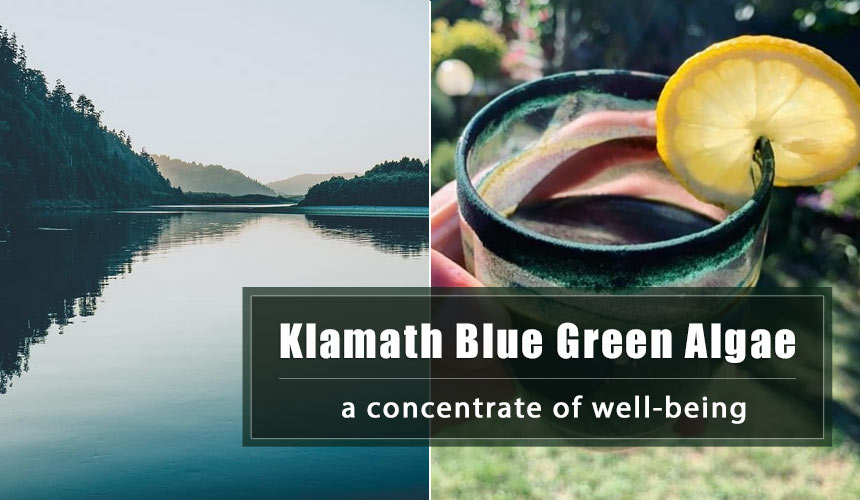 Unlike Spirulina, which is grown in artificial ponds and tanks, Klamath is the only microalgae harvested in the wild, in its true place of origin: Lake Upper Klamath in Oregon, in the United States.

This lake with unique characteristics in the world, makes the Klamath an algae with exceptional properties.

In fact, in addition to being a superfood thanks to its very high content of nutrients, it has a beneficial and regulating action on the psyche, stimulates the immune system and increases the regeneration and recovery capacities of the entire body.

Where does Klamath grow? Habitat, place and time of collection

Klamath is a cyanobacterium discovered since the 1970s, which grows exclusively in a freshwater lake located in Oregon, in the northwest of the United States: Lake Upper Klamath.

The many health benefits reported by consumers in Klamath have led researchers to study it in the United States since 1995, then since the 2000s in Italy, at the University of Urbino by Dr. Stefano Scoglio. The long series of researches and studies has led to numerous discoveries followed by as many scientific publications that will also be listed later in this article.

Lake Klamath offers ideal conditions for the development of this algae. Located at an altitude of 1,300 meters and surrounded by mountains (Mount Shasta and Mount Mzama), the lake is isolated from cities and roads, which allows it to avoid all kinds of pollution (roads, industries, pesticides, etc.).

The lake is fed by 17 different water sources (river, volcanic lake, melting ice, etc.). The water is very pure because, in addition to being free of pollutants, it is filtered from the soil of volcanic origin.

The geographical and geological characteristics of the lake make it a unique place and allow the water to be of extraordinary purity.

The high intensity of the sun (300 days a year), the low depth (on average 1.2 meters) and a neutral pH (between 6.4 and 7.2), give the Klamath alga an exceptional photosynthetic activity. In addition, the bottom of the lake is covered by about twenty centimeters of volcanic sediment, which explains its richness in nutrients and trace elements.

During the summer, on the entire surface of the lake, the algae form what are called algal blooms. In this period Lake Upper Klamath becomes completely green!

Harvesting takes place during flowering, during which time the algae breed every 4 days. When it is more active, the Klamath doubles in size every 20 minutes. The annual production is about 50,000 tons.

The algae are collected by boats equipped with conveyor belts that filter and collect them. It is then dried at low temperatures to maintain its nutritional properties.

What does the Klamath contain? Composition and active ingredients

Klamath is a single-celled and filamentous microalgae: it is a cyanobacterium such as spirulina, belonging to the family of Nostocaceae. Its colour, blue-green, is due to the presence of a pigment called phycocyanin.

The climate and the unique characteristics of the lake make the Klamath an algae with a complete nutritional profile and with a very high bioavailability, that is, easily assimilated by the body.

In particular, the Klamath contains:

Properties and benefits of Klamath

These are the main scientifically proven benefits of taking Klamath microalgae:

Thanks to its absolutely unique nutritional profile, Klamath is the most complete natural product known today.

It is therefore a perfect dietary supplement for the elderly, but also for sportsmen and for all people suffering from malnutrition, fatigue and periods of convalescence due to a disease, or after surgery.

In addition, given its richness in vitamin B12 (cobalamin), it is particularly useful for those who follow a vegan, or vegetarian diet.

In fact, from a recent study [1] conducted by Dr. Stefano Scoglio, it was found that vitamin B12, contained in Klamath, is easily assimilated by our body.

The study, lasting three months, was conducted on 15 vegan people. During the study it was seen how the constant administration of Klamath contributed to increase the levels of vitamin B12 in the blood, as well as to reduce the levels of homocysteine, a toxic amino acid that accumulates just when this vitamin is lacking.

Three to four grams a day of Klamath cover 100% of the recommended nutritional intake for vitamins K, B5, B9 and vitamin B12.

Klamath is rich in antioxidant substances such as carotenoids, chlorophyll, polyphenols and AFA-phycocyanins (AFA-PC).

The latter, thanks to a unique molecular composition, have an antioxidant power 100 times greater than the phycocyanins contained in Spirulina.

For this reason, Klamath is also considered an excellent neuroprotector and cardioprotector.

In addition, Klamath contains amino acids similar to mycosporine (porphyrin and shinorine) or MAA, substances with photoprotective properties, that is, they have anti-UVA properties, protecting the skin from sunlight.

The antioxidant capabilities of Klamath and its extracts have been certified by numerous clinical studies and tests, both in vitro and on humans [2, 3, 4].

3. Regulates and sustains the immune response

Klamath also seems to play an important role as an immunomodulator.

In this study [5], carried out at the University of Montreal, polysaccharides (in particular fucoinades) showed an ability to stimulate and mobilize some cells responsible for immune responses, such as NK leukocytes (natural killer cells) and macrophages.

Although the mechanism of action is not yet understood, the results are promising and suggest that Klamath could be a great natural treatment against various infections, inducing a faster immune response.

In the same study, the researchers demonstrated the ability of Klamath to inhibit the – when excessive – action of polymorphonuclear (PMN) cells, and thus to reduce the production of free radicals and the general level of inflammation of the body.

What makes Klamath exceptional is the presence of a substance called phenylethylamine (PEA). It is a molecule whose general structure is related to amphetamines and catecholamines, which acts as a neurotransmitter and modulates dopaminergic transmissions.

This neurohormone is naturally secreted by the brain in athletes during intense efforts, but also in couples in love, which is why it is commonly called: “love hormone”, “love hormone at first sight” or even “happiness hormone”. It provides a general feeling of well-being, calm and euphoria and helps stimulate libido.

A reduction in PEA is closely linked to the phenomenon of depression. In fact, rates found in more than half of the depressed are below average.

Several studies [6, 7, 8] have shown the benefits of a Klamath-based supplement in depressed patients: an improvement in general mental state, an increase in attention and a better mood have been observed.In addition, no interactions or adverse effects have been observed to date in patients receiving antidepressants.

When administered alone, PEA is not effective because it is destroyed by an enzyme in our body. Klamath is an exceptional product because it contains, in addition to PEA, substances that inhibit this destructive enzyme of PEA.

5. In case of Attention Disorder and Hyperactivity (ADHD) – Promotes a feeling of well-being

A study conducted by Dr. Stefano Scoglio [9] through the supplementation of an extract of Klamath, has shown that a supplementation of 2 to 3 grams per day, of this seaweed, helps to provide a feeling of well-being and improve concentration and attention in children with these disorders.

6. As an alternative to hormone therapy in menopausal women

In 2009 and 2010 [10, 11], two teams of researchers studied the effects of Klamath supplementation in postmenopausal women who do not use hormone replacement therapy.

An improvement in the feeling of well-being, an increase in libido and a decrease in the lipid peroxidation of the membranes * have been observed.

* demonstrated by a decrease in plasma levels of a lipid peroxidation marker, malondialdehyde.

In a 12-week study [12] of 49 patients with type 2 diabetes, Klamath was effective in lowering blood glucose levels, contributing to the management and control of blood glucose in diabetic patients.

At the end of the study it was seen that the administration of Klamath algae extract was effective in reducing fasting blood glucose and glycoglycaemoglobin (HbA1c) levels.

In a subsequent study [13] in laboratory rats, induced to diabetes by streptozotocin, it was seen that after 21 days of administration of an extract of Klamath, the cells of the pancreas in the islands of Langerhans (which are those used for the production of insulin) increased.

Stem cells are primitive cells that are able to transform into different other types of cells in the body through a process called cell differentiation. Stem cells can migrate to sites of tissue damage and participate in the regeneration of damaged tissues.

Unfortunately, this migration decreases with advancing age, which is why the body is more difficult to regenerate with old age.

From the studies carried out [14, 15, 16], Klamath appears to be both able to stimulate the release and mobilization of both somatic and neural stem cells, with great potential in the fight against aging and the general degeneration associated with it.

It also increases the body’s repair power in the event of physical injury, poisoning, excessive effort and viral infections.

Based on studies conducted so far, the recommended doses of Klamath are:

Klamath is a safe natural product and no particular side effects have been detected yet.

Just like Spirulina, not being a real seaweed and not being a seafood product, Klamath does not contain iodine and has no contraindications for those suffering from thyroid problems.

Those taking anticoagulant drugs should first consult a doctor, as Klamath contains high levels of vitamin K, often contraindicated in these situations.

Klamath is commercially available in the form of dried powdered seaweed.

In some cases it is also in the form of tablets, but it is often mixed with additives and the high temperatures to which it is subjected for compression, could damage some of the nutrients.

Among the major distributors in Italy, with an excellent quality/price ratio we point out the Klamath from the farm Erbe di Mauro.

The product stands out for its low drying temperatures, which is very important as it guarantees the maintenance of valuable vital substances and the high concentration of nutrients. In this way the delicate enzymatic systems of algae are controlled and safeguarded, which can easily be altered with strong temperature changes.

In addition, Mauro Herbal Klamath is a pure and certified organic product, 100% natural, without any thickeners, preservatives, sweeteners, or added flavors.