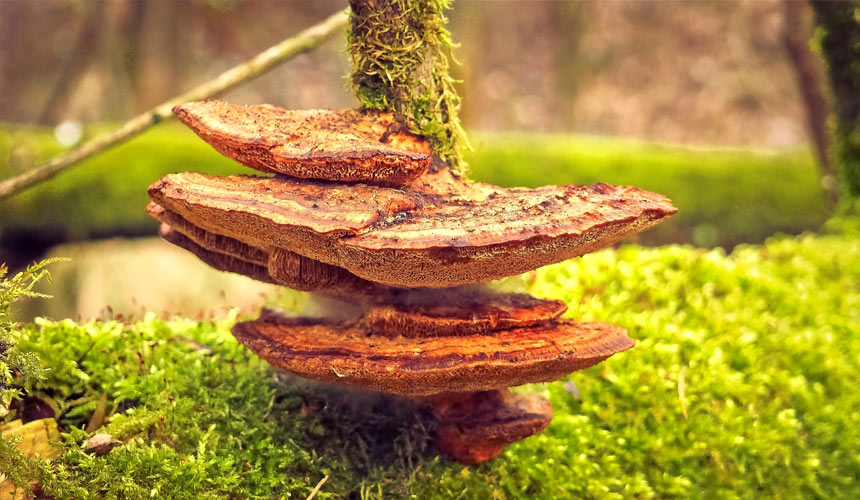 Among the various mushrooms used in natural medicine, especially in oriental medicine, the best known, as well as the most interesting from a scientific point of view, is undoubtedly Ganoderma Lucidum, also known by the name of Reishi, or Ling zhi, which in Chinese it means “divine mushroom” or “mushroom of immortality”.

The first documented use of Ganoderma Lucidum dates back to about 2,000 years ago and the reason why it is known as the “mushroom of immortality” is that it has always been associated with health, physical recovery and longevity.

In Traditional Chinese Medicine it is counted among the ten most effective natural substances from a therapeutic point of view, both for the body and for the mind.

In the oldest Chinese herbarium, the Shen Nung Pen T’sao Ching, the Reishi mushroom is considered the main cornerstone of Medicine itself, a superior category herb, or one of those remedies that can be taken for life, as extremely beneficial for the body and free from any side effects.

In particular, Chinese Medicine considers it a tonic and an exceptional adaptogen, capable of improving the body’s responses to physical and mental stress, strengthening the immune defenses, increasing vitality, calming the mind, improving mood and concentration and in generally promote better health.

What is Ganoderma Lucidum?

It is a saprophytic fungus, or quite rare parasite, that grows in the forests of Asia, North America and Europe (including Italy), on stumps and branches buried or at the base of broad-leaved trunks, especially on oak and chestnut.

Ganoderma Lucidum is a dark colored mushroom, with a color that varies between red, dark brown and black. It has a “shiny” appearance and a woody texture that makes it inedible.

However, the Reishi mushroom can be dried and taken in the form of a powder, dissolved in water or taken through the preparation of decoctions, which is also the method used for centuries by Oriental Chinese and Japanese medicine.

In recent years there have been numerous scientific researches focusing on the in-depth study of this mushroom.

Studies have shown that Reishi contains countless bioactive compounds, which explain from the biochemical point of view the many therapeutic properties attributed to it by Chinese Medicine.

In particular in the Reishi we find:

Each component corresponds to specific therapeutic activities, which can be of a “direct” type such as the anti-inflammatory, antiviral, and antihistamine activity (mostly attributable to the presence of triterpenes), and of an indirect type, such as immunomodulating, hypoglycemic and that antitumor.

Just to name a few.

By continuing to read, I will explain the main uses of this mushroom and why it can really help your health.

Properties and benefits of Ganoderma Lucidum

These are the main benefits demonstrated by the Reishi, which we will then analyze in detail:

Like Panax Ginseng and Eleutherococcus, Reishi is also a powerful adaptogen, that is, a product capable of helping the body and mind to adapt to stress factors, be they physical, emotional or psychological.

It does this by improving the reaction capacity of the brain and adrenal gland and improving our body’s resistance to situations of high stress, sudden climate changes and attacks from external harmful agents.

2. It is a powerful anti-allergic

Ganoderma lucidum is undoubtedly one of the best natural remedies to treat allergies.

It is very effective especially if used preventively, before seasonal allergens intervene and as a medium-long term treatment.

As early as 1988, Professor Tasaka, a pharmacologist at the University of Okayama, Japan, demonstrated that Reishi contains three antihistamine substances capable of blocking the allergic reaction. They are cycloctasulfide and ganoderic acids C and D. (Tasaka, 1988)

Professor Martin has described in two cases the elimination action of Reishi in the resolution of allergic symptoms: in a few days the symptoms decreased and in a month it passed completely. (Martin, 2006)

The antiallergic action is based on two properties:

From studies conducted in laboratory mice [1, 2] it has been shown that the ganoderic acids C and D and the Cyclottasulfide, contained in Ganoderma Lucidum, are able to inhibit the release of histamine from mast cells, reducing allergic symptoms.

This 2006 study conducted by Dr. Powell, reports two cases of people with allergic rhinitis. In just two weeks, the administration of Reishi reduced the symptoms and eliminated them completely within 30 days.

3. Regulates the response of the immune system

Reishi is considered to be one of the most effective mushrooms for modulating the immune system response.

The content of β-glucans and triterpenes gives Ganoderma lucidum the ability to regulate the immune response and to give effective support to our body in case of need (tumor diseases, viral, bacterial and fungal infections), but also to reduce the immune reaction when excessive, as in the case of numerous autoimmune pathologies (rheumatoid arthritis, lupus, psoriasis, hashimoto’s thyroiditis, etc.) and of course in allergies.

There are numerous scientific studies supporting the immunomodulatory activity of Reishi [3]. These studies show that some of the active ingredients present in the fungus are able to improve the proliferation and maturation of T and B lymphocytes, mononuclear cells of the spleen, Natural Killer cells and dendritic cells.

There are numerous studies and researches that associate anti-cancer properties with Reishi.

These are just some of the studies carried out on Reishi regarding its anticancer activity.

The results are amazing and if you do a more thorough search, you will find an enormous amount of clinical data to explore on Pubmed, the online medical library that collects thousands of scientific studies on numerous natural compounds.

The anti-inflammatory effect of Ganoderma Lucidum is mainly associated with the content of oxygenated ganoderic acids.

Several studies show an effectiveness equal to the most powerful anti-inflammatory drugs available today, but unlike drugs, Ganoderma has no side effects and can be taken for long periods of time

These are some of the studies that demonstrate the anti-inflammatory action of this fungus:

There are several studies [5, 6, 7] that show how Ganoderma lucidum performs a beneficial function on the entire cardiovascular system.

It does this through:

Cardiovascular pathologies, such as stroke and heart attack, have, among their main causes, the presence of a chronic inflammatory state, an altered lipid profile (bad cholesterol and high level of triglycerides) and a state of hypertension, or high minimum or maximum blood pressure and the formation of thrombi due to excessive blood clotting.

Regular intake of the Reishi mushroom is able to reduce cardiovascular risk, reducing the inflammatory state, thinning the blood, normalizing the lipid structure (cholesterol and triglycerides) and regulating blood pressure.

Reishi, like Cordyceps sinensis, has an effective antiviral action on a large spectrum of viruses.

In particular, it is the polysaccharide fraction that exerts a stimulating effect on leukocytes, monocytes, macrophages, Natural Killer cells and LAK cells. All these actions are responsible for the antiviral activity and also partly antibacterial.

Other research confirms that the contents of the fungus stimulate the production of a free radical attacker, produced by our body: superoxide dismutase (SOD).

Other Benefits of Reishi

Of course, a simple article cannot be enough to list in detail the countless beneficial properties of this mushroom. It would take a whole book (in fact there are several volumes dedicated to the Reishi).

Below I will limit myself to reporting all the other healing properties that have been recognized:

How to take Ganoderma lucidum

Ganoderma lucidum lends itself well to being taken with hot tea, soups, or by diluting the powder in water, or other drinks.

Making Reishi soup is easy; Just add the Reishi powder in the preparation of the soup, adding other ingredients to improve the flavor such as: extra virgin olive oil, salt, pepper, onion, garlic and other vegetables or herbs of your choice.

You can also boil the reishi mushroom to make a bitter brew, which pairs perfectly with rice.

Another simple way to get all the benefits of Reishi mushroom is simply to dilute the mushroom powder in water, or in another drink such as smoothies, fruit juices, or in a vegetable yogurt.

The recommended dosage is 1 teaspoon per day (about 2 grams). In case of serious infections or diseases it is recommended to triple the dosage. Contraindications and side effects

No relevant side effects have been identified in the use of Ganoderma lucidum. At the suggested dosages, it is a safe natural product.

As for contraindications, use is not recommended for people allergic to fungi and / or yeasts and for those who have recently undergone an organ transplant.

Although there are no studies that prove its toxicity, as a precaution it is not recommended for use by pregnant and breastfeeding women.

Where to buy Ganoderma lucidum

Ganoderma lucidum is a product that can be purchased in most pharmacies and herbalists in Italy, both as a pure powder and as titrated extracts (usually in capsules).

Powder or capsules, which one to choose?

Millennial Traditional Chinese Medicine has always made use of Reishi as a whole or pulverized mushroom. Considering that the powder contains the full range of phytonutrients present in the fungus and fruiting body of the fungus, we recommend that you opt for this solution.

If you are looking for a natural, certified organic product with an excellent quality / price ratio, we can only recommend the purchase of Ganoderma lucidum from the Erbe di Mauro farm.