Today i would like to talk to you about another very important plant for the prevention and also for the treatment of Diabetes, especially the type 2. I’m talking about Aloe.

This article is taken from “How to deal with Diabetes“, a book published by Dr. Giuseppe Nacci, a great expert in natural medicine and phytotherapy.

The efficacy of Aloe on type 2 diabetes and cardiovascular diseases.

Aloe has been shown to be very effective in treating type 2 diabetes and its complications, including heart problems.

In a 1985 study [1, 2], the use of Aloe Vera was monitored on 5,000 subjects, many of whom affected by diabetes and remarkable results are observed on three important aspects of diabetic pathology and its complications:

The study, which lasted 5 years, was conducted on 5,000 patients, between 35 and 65 years of age, who suffered from atherosclerosis and 63% of whom were also diabetic. Many of these also suffered from arterial hypertension (43% of cases), finally, about half of the sample was made up of smokers: 10 to 15 cigarettes a day.

All the patients had suffered various attacks of Angina pectoris in the past, and the disease had been confirmed on the Electro-cardiogram.

Here are the results obtained on 5,000 patients with a natural cure based on Aloe Vera juice

The study developed as follows.

The patients were periodically given 100 grams of Aloe juice; they were then taught how to mix it with flour with which to prepare their bread at home, which they ate for lunch and dinner; patients were prescribed a strict diet and were also prohibited from drinking alcoholic beverages of any kind.

The treatment with bread, added with Aloe Vera juice, had tangible positive results already after the first three months: 94.4% of diabetics already had a normal glycaemia and only 5.6% still had sugar values at above the norm.

To ascertain the effects of Aloe Vera therapy, blood glucose levels were assessed during the study at two different times, ie fasting and after a meal.

The trend towards a significant improvement was confirmed for both fasting and postprandial (ie after meals) blood glucose.

2. Results on the cardio-vascular system

Regarding the cardio-vascular aspect, a first proof of efficacy took place about a year after the start of the treatments, when the effect of the Electro-cardiogram, carried out on all these patients during an exercise test was evaluated to the running belt.

Before starting the treatment, all heart patients presented the classic signs of ischemia which, in 56.4% of these cases, involved the anterior wall of the heart and in 43.6% the lower part. However, when this test was repeated after one year of treatment with Aloe Vera, only 7% still showed signs of ischemia.

It is therefore extremely important to underline that in the vast majority of patients, even more than 90%, the attacks of Angina pectoris (chest pain), due to myocardial ischemia, ceased.

3. Results on cholesterol and triglycerides

Equally positive results were obtained for total cholesterol and triglycerides.

This finding is particularly important because at the start of the study, all patients had increased total cholesterol and triglyceride values.

This study, conducted by Dr. Agarwall, is the most extensive research that has ever been done on the therapeutic capacity of Aloe Vera juice in these pathological forms: type 2 diabetes, hypercholesterolemia (high cholesterol), hypertriglyceridemia (high triglycerides), angina pectoris and heart disease on an atherosclerotic basis.

Another non-marginal fact, unlike the classic studies in which chemically synthesized drugs are tested, is that of all 5,000 patients none died and no negative side effects were observed.

A serious and independent research that clearly demonstrates how Aloe can be used with positive effects in heart disease of atherosclerotic origin and in patients with type 2 diabetes.

Source: How to deal with diabetes by Giuseppe Nacci

Where to buy Aloe juice?

One of the few Italian companies that produces fresh Aloe juice, natural and without added preservatives, is Erbe di Mauro farm. The farm produces various recipes based on Aloe, including pure Aloe Vera juice (without aloin), and pure Aloe Arborescens juice, made by cold pressing the whole leaves.

You can buy the product from here: 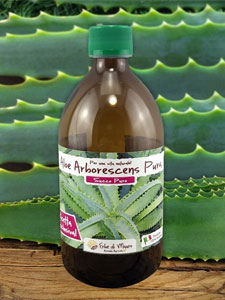